This Website Uses CookiesBy clicking “Accept”, you agree to the storing of cookies on your device to enhance site navigation, analyze site usage, and assist in our marketing efforts.

Privacy Preference CenterWhen you visit any website, it may store or retrieve information on your browser, mostly in the form of cookies. This information might be about you, your preferences or your device and is mostly used to make the site work as you expect it to. The information does not usually directly identify you, but it can give you a more personalized web experience. Because we respect your right to privacy, you can choose not to allow some types of cookies. Click on the different category headings to find out more and change our default settings. However, blocking some types of cookies may impact your experience of the site and the services we are able to offer.

These cookies are necessary for the website to function and cannot be switched off in our systems. They are usually only set in response to actions made by you which amount to a request for services, such as setting your privacy preferences, logging in or filling in forms. You can set your browser to block or alert you about these cookies, but some parts of the site will not then work. These cookies do not store any personally identifiable information. Privacy Policy.

These cookies enable the website to provide enhanced functionality and personalization. They may be set by us or by third party providers whose services we have added to our pages. If you do not allow these cookies then some or all of these services may not function properly.

These cookies allow us to count visits and traffic sources so we can measure and improve the performance of our site. They help us to know which pages are the most and least popular and see how visitors move around the site. All information these cookies collect is aggregated and therefore anonymous. If you do not allow these cookies we will not know when you have visited our site, and will not be able to monitor its performance.

These cookies may be set through our site by our advertising partners. They may be used by those companies to build a profile of your interests and show you relevant adverts on other sites. They do not store directly personal information, but are based on uniquely identifying your browser and internet device. If you do not allow these cookies, you will experience less targeted advertising.

Disable All
Confirm My Choices

Founded with Research in Mind

Craig Jones and Kevin McFarland co-founded Formative while attending graduate school at UCLA. From the beginning, they looked for every opportunity to learn more about how educators were utilizing technology in the classroom.

Jones and McFarland utilize a research-based approach to accomplish two main goals: 1) To push our understanding of effective pedagogical practices as educators, and 2) to make sure Formative is based on real-world teacher experiences and not only a personal vision of what the future of education could entail.

Craig Jones worked as a Graduate Research Assistant for professors from UCLA Anderson, UC Berkeley Haas and UPenn Wharton to conduct research measuring the effect on which social pressures dissuade positive opportunities for at-risk youth. This research was acknowledged in the paper How Does Peer Pressure Affect Educational Investments?, which received media coverage in the Washington Post, Atlantic, and NPR, amongst others.

Kevin McFarland worked as an undergraduate researcher while attending Lehigh University, focusing on the transportation of heat throughout high-energy plasmas in tokamak fusion reactors. His research was done under the guidance of professors Glenn Batement and Arnold Kritz, to whom he continues to hold immense gratitude for their influence in his analytical approach. You can download a copy of his final report and a report of his research supported by Professor J.D. Callen (University of Wisconsin) at the following links: Testing Models in Simulations of Tokamaks and the Sensitivity to Those Models - McFarland et al and Paleoclassical H-Mode Pedestal Modeling - Callen et al.

Formative understands the necessity of staying independent in research of its own platform. We chose our specific pedagogy for formative teaching in large part due to prior research on Formative Assessment and Feedback.

According to the Education Endowment Foundation, speeding up the feedback loop between teachers and students is one of the lowest cost, highest-impact ways to help student learning. See research here. 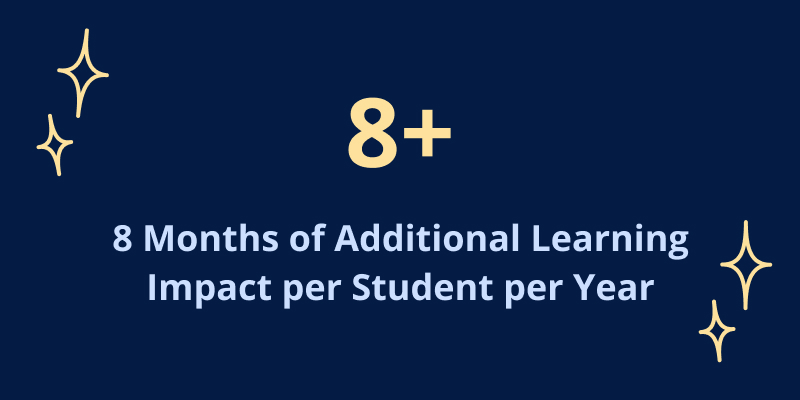 Additionally, the studies below were performed completely by 3rd party research organizations with the intent to remove any bias or influence. In these studies, Formative team members did not conduct surveys, analyze responses, or write the results.

A Study of Educators' Self‐Reported Practice

First and foremost, special thanks go out to the Jefferson Education Accelerator (JEA) for their work with us the past few years and to the Michael and Susan Dell Foundation for making this independent study possible. We had been wanting to find a partner to research formative assessment practices and they were instrumental in getting the American Institute of Research (AIR) on the job. This is the second independent research conducted on behalf of Formative, and you can find the announcement from JEA HERE.

Download a copy of the report in full HERE

Highlights of the Results

The first half of AIR’s study focused on teachers’ perceptions of Formative the platform (goformative.com). Here are some highlights of their responses. 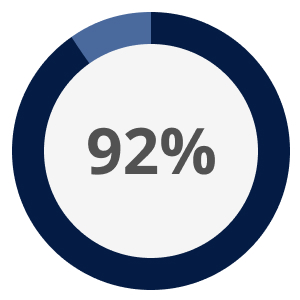 92% of educators/teachers believed that Formative fit easily into their weekly schedules and improved efficiency. 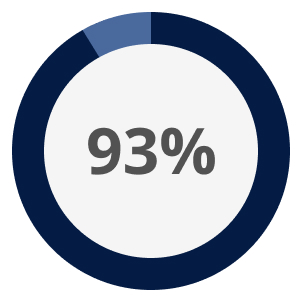 93% of educators/teachers believed that Formative was an invaluable tool to add and use regularly within their classrooms. 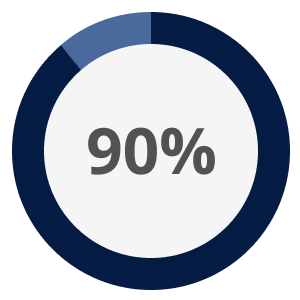 90% of educators/teachers believed that Formative was directly responsible to the improvement of overall student outcomes.

The second half of AIRs study focused on the barriers, support structures, and practices inside of an educational setting that can impact a teacher’s ability to effectively utilize formative assessments as a practice. The following figure represents the correlation of responses across the listed categories. 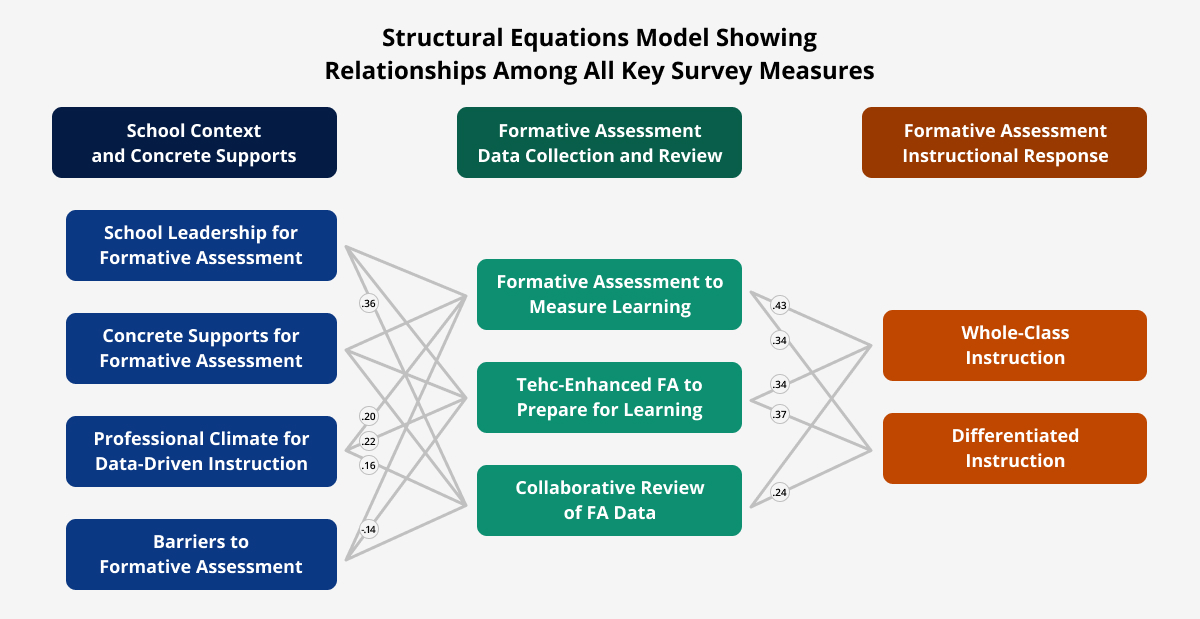 This was the first independent research conducted on behalf of Formative. Partnering with a school in Queens, NYC was a pivotal moment for Formative to really evaluate the efficacy of its tool and approach in a drastically different environment from what it had observed in the past.

Download a copy of the report in full HERE

I feel like Formative gives me a better understanding of what we do in class.

The technology is very easy to use. How instead of writing stuff on paper and take tests on paper, we can do it online.

It’s really helpful for anyone who needs help. It helps me to stay more focused on the topic.

I liked how you could add attachments or photos.

I like that when the teachers grade your work you could just click on that assignment and you can see your grade.

We want to do checks for understanding, so that we can differentiate instruction more effectively. It is very simple. The tool does exactly what we wanted it to do.

We were looking to find a tool that could offer real-time feedback so that teachers can adjust their lessons on the fly. Formative was able to do that for us. I saw that teachers had a visual of how each child was responding on their individual laptops, and could display the responses they wanted on the SMART Board. So the teacher could adjust by going directly over to Johnny and working on the misunderstandings he was having, or could project a common problem for everyone to see.

To help teachers at Crossroads Academy (a pseudonym) address the individual needs of all their students by checking to make sure they understand what is being taught in the classroom. Additionally, teachers wanted to be able to instantly check for student understanding by accessing data in real time.

EDC|CCT collected data on five “meta-indicators” that explain a product’s effectiveness for addressing a school’s challenge during the 90-day pilot. Pilots received an overall rating of Low, Moderate, or High on each indicator, based on a set of sub-indicators. 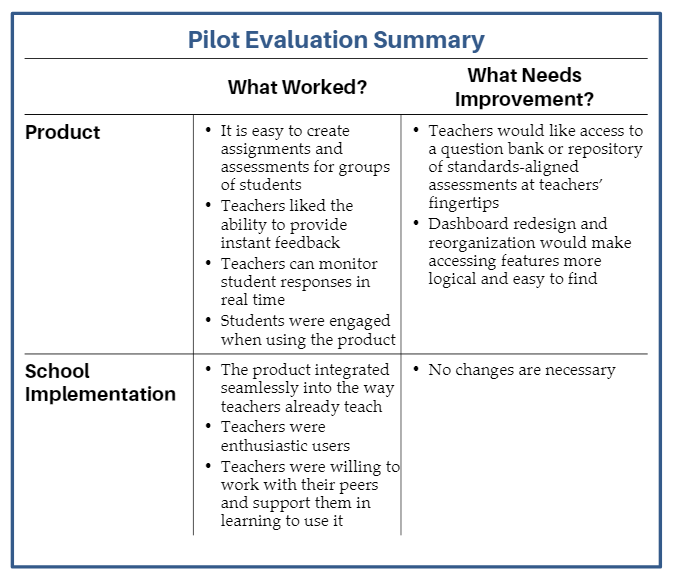